Bees, wasps, and yellowjackets are among common warm weather pests whose stings can be more than just a painful nuisance. Most people only have a mild reaction to the sting, however some people have severe to fatal reactions, and anyone can be affected if a large number of stinging insects swarm and sting at once. Unlike honey bees, wasps and bumblebees can pull out their stinger, so they’re able to sting more than once without injuring themselves. Not only do you need to worry about the stinging pests themselves, but also about locating and removing their breeding places. One way to protect yourself and your family from types of stinging insects like wasps and bees this summer is to remove the nest or hive completely. It is not advisable to attempt removing a stinging insect nest on your own since doing so can be extremely dangerous. 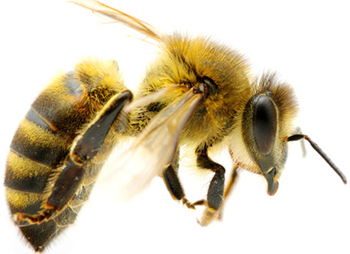 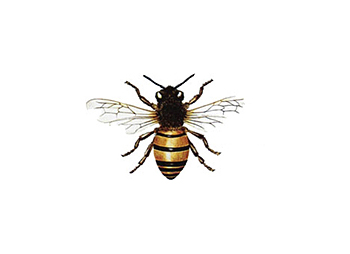 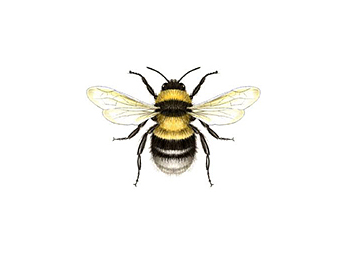 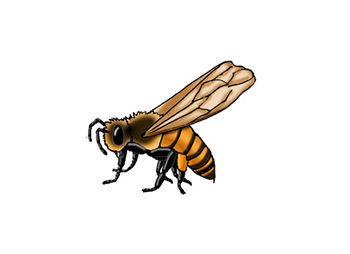 Bees are generally full-bodied, hairy and appear to be fuzzy, a characteristic that helps them collect and disseminate pollen. The most commonly encountered bees are honey bees and bumblebees. Bee swarming typically occurs in colonies that are thriving and have robust populations. Weak colonies of bees may not swarm until they become stronger and larger in population. Bee colonies may become weak due to starvation, disease or failing queens. Several factors can contribute to the occurrence of a swarm, such as seasonal changes and overcrowding.

Honey bees are social insects found all over the world. They are beneficial insects because of their role in pollination. Honeybees are the only stinging insects that will actually survive a winter with the nest or colony intact. Honey bees are protective, but generally less aggressive than some other stinging insects; they are known to sting when provoked or threatened.

Bumblebees, usually recognized by their black and yellow banded body hairs, although some may be orange, red or even solid black are alsoBumblebee considered a beneficial insect because they pollinate crops and plants. The nest is usually underground but can occasionally be found in log piles and or debris. Unless in a potentially dangerous location to people and pets, bumblebees should be left alone. Once disturbed, they can be very aggressive and dangerous.

Africanized honey bees (AHB) have made their way into the state of Florida. AHBs breed and compete with the European strains of honey bees that normally inhabit our state. Attacks occur when people get too close to a nesting colony of AHBs. The Africanized Bees do not sit around and plot attacks on humans, however they can be a dangerous stinging insect, africanized bees have been known to chase people for more than a quarter of a mile once they get excited and aggressive.

Other bees like carpenter bees can cause damage to the wooden parts of your house, deck, fence, etc. So effective treatment of bees relies upon the proper identification of the particular species living near your home. 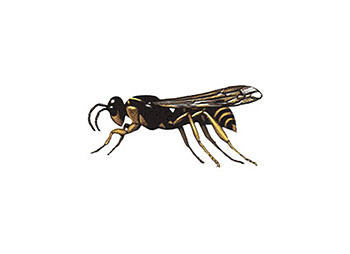 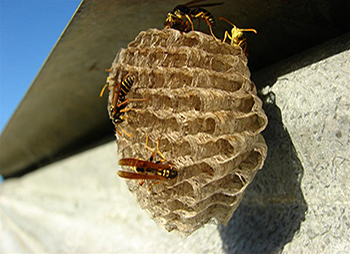 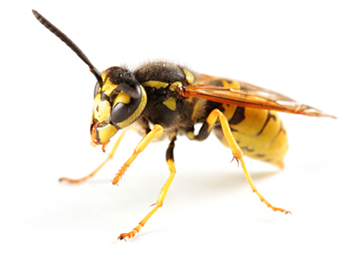 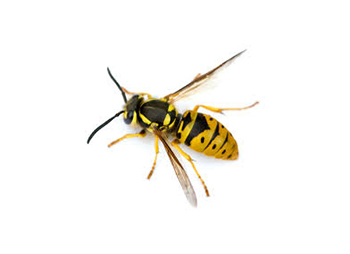 Most wasps have two pair of wings and a pinched waist and range in colors from black to metallic greens and blues and vary in size from almost microscopic to several centimeters long. Some wasps are aggressive species and can sting when threatened. Unlike honey bees, remember, wasps often are capable of stinging multiple times, as their stingers remain intact after stinging.

Mud Daubers get their common name from the fact that they construct nests of mud and are mainly considered nuisance pests since they rarely sting.

Paper wasps derive their name from their hives, which are constructed from dead wood fibers, plant stems and saliva, and look as if they are made from grey paper. The nests that are usually found under gutters and eves. Paper wasps are usually not aggressive and only are a danger when disturbed. Their appearance is distinct from yellowjackets, as they are primarily dark brown with yellow markings on their heads and thorax.

Yellowjackets are slow to sting, unless their nests are threatened. But if their nest is located near a structure they are a huge nuisance and control is needed. These stinging insects typically have a yellow and black head/face and patterned abdomen. Mature colonies, built in the ground or in hollow voids such as attics or wall spaces in buildings, can reach huge proportions.