These are among the species that invade human dwellings and are considered pests. These pest cockroaches can be carriers of various diseases because they are commonly found near waste deposits or in the kitchen, where food is present as well as causing allergic reactions in many people. Commercial establishments may also experience cockroach infestations. Cockroaches can wreak havoc on your home. Cockroaches have six legs, two antennae and some have wings. With plenty of food, warmth, water and nesting sites, they can remain active all year round. Without special equipment, materials and know-how, cockroach control can be a losing battle. Cockroaches have been demonstrated to carry and potentially transmit disease such as Salmonella and other viruses. 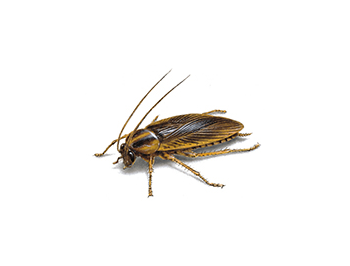 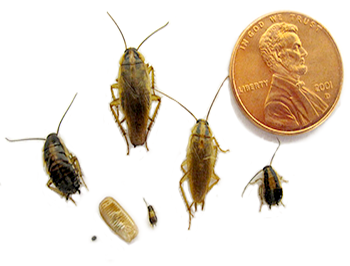 Although capable of living outdoors in tropical environments, German cockroaches are most commonly found indoors, with a preference for the warmer and more humid areas of a structure. In homes, these insects will typically be found in kitchens and bathrooms, but can move to other areas of a home on pipes, wiring, and, simply, by climbing the interior of the walls and across ceilings if food and moisture are available.

In most cases, German cockroaches are introduced into a structure or residence when bags, boxes or cardboard containers are brought into the home. They may even be brought in with used appliances. In multiunit apartment buildings, German cockroaches can easily move between units, using the shared plumbing and pipes as a highway. German cockroaches are scavengers, capable of feeding on most any food source available, including toothpaste, soap and the bindings of books. These pests are known for their ability to capitalize on the availability of even the smallest amounts of food by feeding on crumbs missed during cleaning or feeding on the dirty dishes left in the sink overnight.

German cockroach droppings may appear as small, dark, “pepper-like” material left on countertops or in drawers. Fecal staining may appear as dark spots or smears, some that are slightly raised, in the corners of rooms, along the tops of doors or around small cracks and openings into walls. Since German cockroach females carries their egg case until 1 to 2 days before depositing it, empty egg cases may be found in areas that the females frequent. German cockroaches are also known to secrete a number of odorous compounds. When populations are present in large numbers, it may be possible to detect a mild, or what some have reported as a "musty" odor.

German cockroaches are nocturnal, which means they are most active at night. If they are seen in the open during the day, it generally means that the population is so large they are being forced out of the shelter! 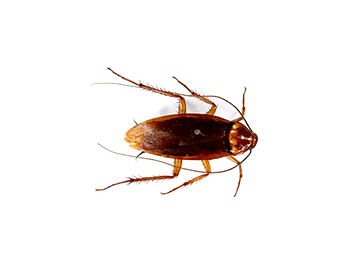 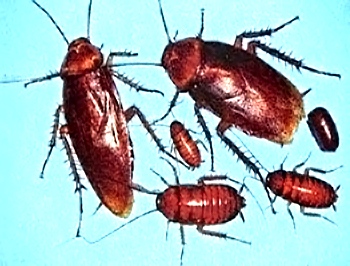 The American cockroach is one of the largest of the common cockroaches at about 1.5 inches long. Both the male and female have wings, but they glide rather than literally fly.

Sharing many characteristics with the German cockroach, it primarily feeds on decaying organic matter and sweets but, as a scavenger, it will eat just about anything, including paper, hair, cloth and dead insects. It can be found in: dark, moist sites, such as basement, bathrooms, kitchens, drains, and sewers. The American cockroach is found both indoors and outside, and will infest structures by coming in from outdoors, particularly after a heavy rain or in search of food and water; being carried in with packages or belongings; or tunneling in through sewer lines.

Every cockroach species varies, so too will its control. For specific information and tips on cockroach prevention and control, call your Pest Control Specialist.