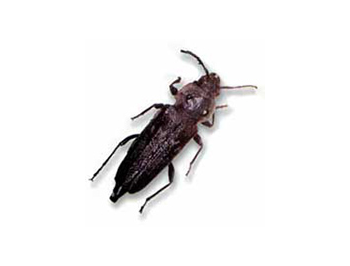 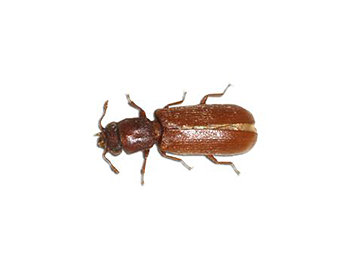 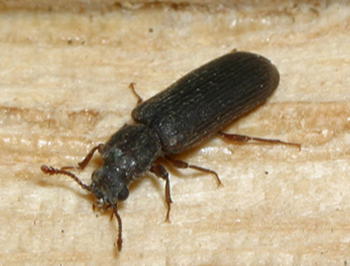 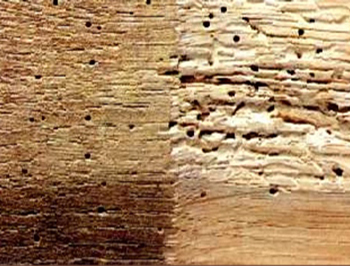 Powderpost beetles are flying pests that lay their eggs in cracks of wood and the larvae tunnel into the surface, filling it with a very fine powder-like dust. Powderpost beetles have long, narrow, flat bodies that allow them to easily attack wood surfaces. These beetles are reddish-brown to black in color and are usually about 1/8 to 1/4 inches long. They can be found in all 50 states and are very active at night being attracted to the light. There are about 11 species of powderpost beetles in the US.

Powderpost beetles often attack hardwoods, and can be found in hardwood floors, timbers and crates, antiques and other objects made of hardwood materials. Some researchers believe that powderpost beetles are second only to termites in the United States in their destructiveness to wood and wood products.

Another example of wood destroying beetles is the old house borer. This species belongs a group of insects known as the "longhorned” beetles. Despite of their name, old house borers actually infest wood less than 10 years of age and can cause serious cosmetic, as well as structural, damage.

Old-house borers prefer seasoned softwoods, and particularly pine. Only the larvae feed on the wood. Larvae take two or three or more years to mature, depending on the moisture content of the wood. Larvae usually mature in the spring, and the mature adults then cut holes 6–10 mm (¼ to 3/8 in) in diameter to exit the wood. Adults are most active in the summer. They are black or brown with grayish “hair” on their upper bodies and wing cases. They have shiny spots that resemble eyes.

There are other wood-destroying beetles which may be identified by your Pest Control Specialist.