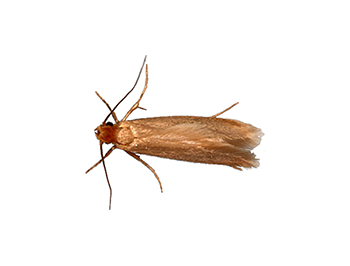 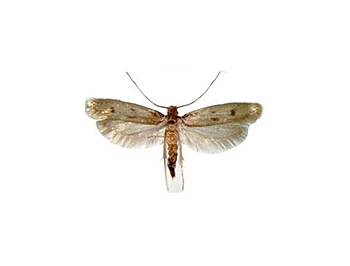 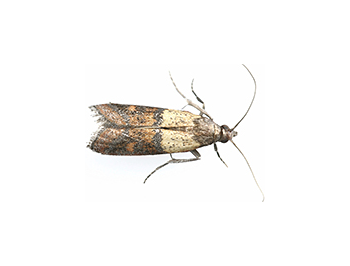 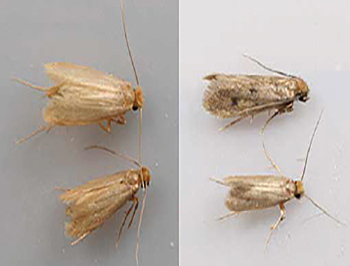 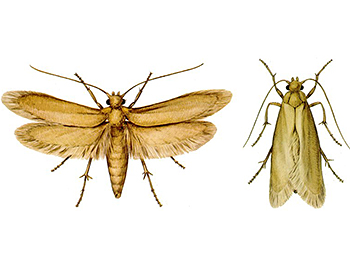 Moths typically have two pairs of wings and large compound eyes but vary dramatically in size and appearance. Some are large and others are tiny and colors can vary from brilliant metalic colors to drab browns and greys, but most indoor infesting moths we deal with are smaller than 2 cm wingspan and often are shades of grey or brown to reddish brown.

The webbing clothes moth is the most commonly encountered fabric moth. The adult is gold with reddish-golden hairs on the top of its head. A row of golden hairs fringes its wings, which have a span of about 1/2 inch. Typically they are only about 1/4 inch long. Because these moths are weak flyers (their flight pattern is distinctive—they tend to flutter about rather than fly in a direct, steady manner) that aren't attracted to lights, you'll usually find them close to infested items, such as in a dark area of the attic or closets. Since moths can be found in the folds of fabrics or hiding in corners and are capable of infesting a home long before their populations are noticed. As a result, substantial damage can occur to clothing or furnishings.

Clothes moths might initially establish themselves on woolen items stored improperly for long periods. Materials which are readily infested include sweaters, coats, upholstery, piano felts, silk, hair, fur, feathers, cottton, linen, blankets and any other woolen products. Synthetic fibers and cellulose materials are damaged only incidentally, often because they are soiled with greasy food stains, body oils, or other residues which are the primary object of the insect attack.

To inspect for clothes moths, look to see if there are silken tubes in the hidden portions of clothes, such as under collars, or silken mats or patches on material. Both the silken tubes and mats often have fibers and feces incorporated into them.

Food-infesting moths fly in a more direct, steady manner. Food-infesting moths also don't have the little tufts of hair on their heads. Such stored foods as meat, fish, meal, bran, semolina and flour (possibly preferring wheat flour) and milk products are vulnerable to these insects.

These moths come in a variety of types, but are usually frequenting your pantry or kitchen cabinets, pet food, or garbage can.

If not properly managed, the larvae of these pests will cause serious damage.